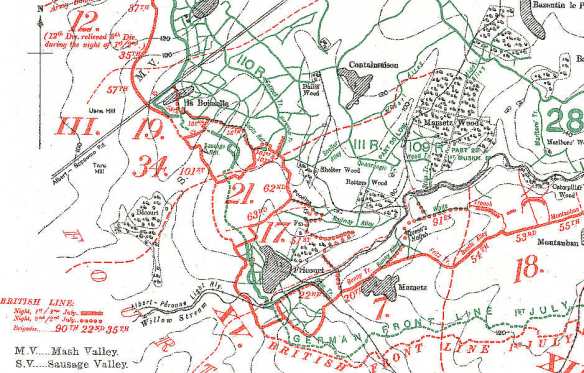 “Let us respect their endeavours. Let our memories live on”

The Welsh 38th Division was formed from several Regiments including men from the Royal Welsh Fusiliers and the Royal Welsh Regiment. They were answering the call to arms by David Lloyd George and enlisted eagerly expecting exciting wartime adventures.

They were, however, poorly trained, ill-equipped and badly commanded. When planning the forthcoming attack on Mametz Wood, the generals calculated it would be a battle of a few hours; it would, in fact, last for five days. They failed to take into account the fact that the wood was defended with trench systems, machine gun posts and mortars. Manning these positions were men from the Lehr Regiment of the Prussian Guard, who were well-trained and well-armed and very determined.

On the 7th July 1916, the 38th Welsh Division were given orders to capture Mametz Wood. The Division were tasked to leave their trenches and to advance towards a position called the Hammerhead. The distance to cover was maybe 300-400 yards; this distance was to cost them heavily in casualties and even led to them having their bravery questioned.

At 08.30 on the morning of the 7th July, following a preparatory artillery bombardment, they attacked. Initially it appeared the barrage had worked; however, as the men advanced towards the darkened woods, they soon came under heavy machine gunfire from both exposed flanks and they started to take heavy casualties.

The attack ground to a halt, and a second barrage was ordered later that morning. This, too, failed to silence the German machine guns.

Fortunately for the Infantry, a further attack that had been planned for that afternoon was subsequently cancelled as the machine gun posts still remained in position. When the attack ceased, the Division had suffered 400 casualties.

During the 8th and 9th, men from the 6th Dorset’s Regiment managed to take and hold the Western end of Wood trench; however, seven unsuccessful attempts to take Quadrangle support Trench had by now been made.

On the 10th July, a further attack was planned and, following an artillery barrage, the four Battalions went over the top at 4:15. They attacked the woods between Strip Trench and the Hammerhead following behind a rolling barrage. This time the attack made better progress, and throughout the day vicious hand-to-hand fighting took place in the woods. When night fell, the fighting continued amongst the shattered tree stumps, branches, brambles, barbed wire, trenches and shell holes. German troops were almost pushed out of the woods, but as night fell, they clung to 40 yards of its northern edge. In the confusion of the darkness and destruction, both forces were subjected to heavy shelling from both hostile and friendly fire.

The morning of the 11th, the Welsh tried to clear the woods of German resistance and a further day of fierce hand-to-hand fighting ensued, but still the Germans clung to the very tip of the northern edge of the wood. During that evening, though, they were to withdraw, leaving the woods finally in the hands of the Welsh.

Daybreak on the 12th, and the woods were in British hands. With a cost nearly 4,000 casualties, the Division was withdrawn from combat, and it would be a year before they would return to the Western Front.

The 38th Division was withdrawn from the line and replaced by the 21st Division.

The men of the Welsh Division were then to be accused of “failing to advance with enough spirit” — in other words, they were named as cowards. Although the statement was later retracted, the damage had been done.

A memorial was only put in place on July 1st 1987 by the South Wales Branch of the Western Front Association. I believe it is one of the most moving memorials on the Somme. The Memorial is not the easiest to find. Google Earth and a sat nav are a must prior and during the trip. You can drive straight past if not careful.

It took me approximately 45 seconds to cover the distance between the Dragon and the Hammerhead. This brought home to me the scale of the losses incurred covering such a small distance. When I reached the tree line and entered the woods, the trenches could still be seen. The years had tried to repair the woods from the damage from those five days 95 years ago, but signs of battle can easily been found. In such a tranquil wood, the only sounds were my footsteps and the songs of the birds — how different from those few days in 1916.

As I stood in one of the remaining trenches and looked back towards the Dragon, it struck me that with the field of fire the Germans had from the woods and the strip trench, the 38th Division’s frontal assault was near suicidal. As I turned to leave the wood, I found a photograph of a Welsh soldier pinned to a tree, a personal tribute to one of the many men who perished in Mametz Wood in July 1916.

“More than any other modern war ’14-’18 lives in the memory as the ultimate example of a mismatch between what was at stake and the price that was paid. It is the war of the ‘lost generation’, sacrificed for a cause which, in hindsight, is difficult to pinpoint.”

The WW1HA is going to the battlefields again in May.

The tour will begin May 25 in Brussels and go to the fortress city of Liege, where brave little Belgium’s army held up the German advance for 12 days at the beginning of the war.

The group will move on to the Vosges Mountains in Alsace, to visit the Le Linge battlefield and museum, full of artifacts. More than 2 miles of trenches and fortifications are still in place. On to Hartmannswillerkopf and its incredible views — at nearly 1,000 meters above sea level — and memorials. The American Ambulance Services worked here.

Then to Verdun, the St. Mihiel Salient, Belleau Wood, Le Hamel — where American troops fought alongside Australians on July 4, 1918 — and a full day of exploring around Ypres, concluding with the Last Post ceremony at the Menin Gate.

To walk where they walked, to stand on the ground they fought so hard for is incredibly humbling.

To raise a glass to them while chomping frites — the best fries/chips you will ever eat — with the possibility of chocolate croissants for breakfast is incredibly fun.

Come on. I’ll meet you in Brussels and buy you a beer.

Paul Reed, blogging at Great War Photos, has a nice post here on the Liverpool Pals, who fought at Montaubon during the Somme offensive:

You can find Montauban on the map at this WW1HA link:

“The battle of the Somme was a turning point in Newfoundland history. At the time the Canadian province of Newfoundland was a British colony. The Newfoundland Regiment lost many men that day that even today, July 1st is Canada Day but also Remembrance Day in Newfoundland.” 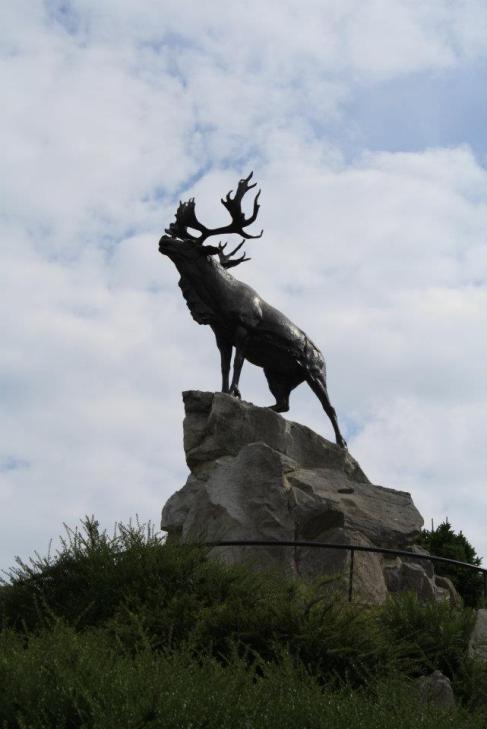 Facebook friend Somme Battle’s photo of the Newfoundland Caribou and Memorial to the Missing in Newfoundland Park, Beaumont Hamel, Somme.

June 30 can be remembered as the anniversary of the Battle of Richebourg — intended as a feint before the Battle of the Somme. The Germans were not fooled, and the Royal Sussex Regiment (South Downs) took terrible casualties.

And here is a photo of some of the South Downs at training camp:

Among the South Downs men was poet Edmund Blunden, who wrote, in the piece “Can You Remember,”

And some are sparkling, laughing, singing,
Young, heroic, mild;
And some incurable, twisted,
Shrieking, dumb, defiled.

These sites can tell it better than I can.

Graham Corgan’s beautiful photo of poppies on the Somme.

Fellow blogger Sommecourt has a very nice photo of post-war Peronne, a village on the Somme that was nearly destroyed as it changed hands during the war. 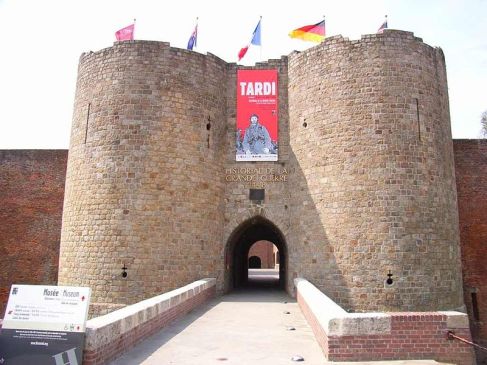 Front of the Historial, taken by Bodoklecksel, posted at Wiki Commons.

Here’s an interesting video presentations about the colonial troops who fought for France in the 1916 Battle of the Somme. I think of that battle as an unmitigated British disaster — France contributed three corps, including the I Colonial, and did pretty well, actually advanced their line. But they got dragged down by the British failure on the north end of the battlefield. You needn’t understand French to appreciate this video, although I’m sure I would appreciate it more if my French went beyond a lazy eighth-grader’s.

In 1915, 6,000 French, Algerian and Moroccan colonial troops died in the first minutes of the first German gas attack at St.-Julien. More were killed trying to escape the gas, mowed down by machine guns. The British and Canadians rushed into the gap, which had surprised the Germans, But that’s a story for another day.

Three French soldiers captured by the Germans in 1918. Two of them are from Senegal. This photo is from a fantastic collection of postcards on Flickr.com, posted by collector drakegoodman.

Another great blog, about a Canadian’s visit to the battlefields.

To all our friends up north: I know it isn’t spelled “carobou.” I’m just not a very good typist. (Cool blog, though, eh?)