If time is more precious than money, consider hiring a guide. The going rate is generally $400-$600 per day. If that is not in the budget, they can often provide initial guidance and suggestions. In many cases, the experts are Europeans with good command of English and the advantage of living close to the battlefields. A partial list of tour guides and authors includes Markus Klauer of Germany (www.weltkriegsbuch.de/pages/index2.htm); Michael Prisille of Germany (www.verdun14-18.de/en/); Wim Degrande of Belgium (wim.degrande@skynet.be); and Englishwoman Christina Holstein (Christina.holstein@hotmail.com). Americans, too, have developed very specific expertise. For example, Rob Laplander has researched the Lost Battalion extensively, and Steven Skinner has researched the life of aviator Frank Luke.

The benefit of experts is best illustrated in this example: A friend knew that his great-uncle served in the (Imperial German) Infanterie-Regiment Nr. 87, and that he was buried in France. He wanted to retrace his great-uncle’s footsteps; but he had no knowledge of traveling in France. So he turned to the author for assistance.

Vacation time and budgets were worked out, and it was determined that three days would be available to retrace the great-uncle’s steps. This meant a very narrowly focused trip. It was decided to visit the cemetery grave and the area of line held at the time of his death in June 1918 on one day, and to follow the regiment’s advance in the Verdun sector for two days. IGN Series Blue (1, 25,000) maps were purchased for both regions.

This was an extremely successful trip, where years of experience, determination and luck all came together. The experience was in the form of understanding and appreciating the information in the German regimental history — especially the detailed maps. The determination was in the form of driving down a narrow, dirt farm lane in a rental car to get to the German front line position and walking through about 30 yards of crops to enter a wooded ravine where there had once been a headquarters. The luck was in the form of finding the wooded area largely undisturbed, complete with shell holes and a few unexploded shells that the farmer had removed from the field. Similarly, the combination of IGN maps for Verdun and the regimental history’s maps made it easy to follow the great-uncle’s advance.

The battlefields of World War I are still there to be explored. The Internet and the information age continue to make it easier; but it takes effort and determination on several levels to make a truly rewarding trip. Bon voyage!

About the author: Randal S. Gaulke is an armchair historian and battlefield tourist. Since 1994 he has been focusing on the Meuse-Argonne Offensive; with an emphasis on the German side of the battle. He enjoys sharing his interest with others, and he can be reached at lavarennes@meuse-argonne.com.

Blogger’s note: Speaking of luck … on one trip, bad luck led to the bus coming to a dead end on a dirt track out in the middle of the French nowhere. Good luck led a herd of cattle to misinterpret the arrival of the bus as a food delivery and come charging across a field toward us. The frustration of the dead end is barely recalled, but the charge of the cows will never be forgotten. 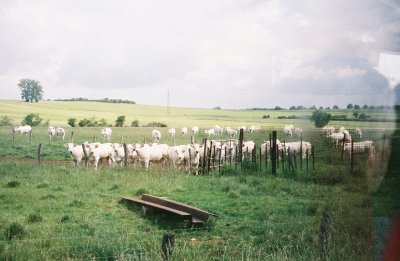