Collectors are amazing — sometimes they latch onto what seems a useless bit of memorabilia, and the next thing you know, their basements are stuffed and a bit of history is saved.

Members of the PsyWar Society collect propaganda leaflets that were dropped on enemy troops and civilians. The leaflets usually say something like, “Don’t shoot, or you’ll be sorry!” or “We’re coming to save you from tyranny!” or “Buy War Bonds” — the Royal Flying Corps dropped leaflets on Britain promoting sales of bonds and savings certificates.

PsyWar.org has posted an official British report written by a military intelligence officer in 1918 that reads in part:

“It cannot be said that there is any evidence as to the efficacy of German propaganda amongst the British troops. Samples of it are sent over from G.H.Q., France and examined by M.I.7.B. They consist of flysheets in bad English announcing German successes on other fronts, pictures of the happy fate of prisoners of war in Germany, boasts of the results of the U-boat campaign and copies of the Continental Times. … From a propagandist point of view, (material directed at the French) is much more unscrupulous and probably more effective than our Courrier, but this is due to the fact that a special effort has been made to exclude ‘inflammatory’ matter from the Courrier. Were a suitable method of distribution in operation, the Courrier could very easily be greatly strengthened from the propagandist point of view. It is of interest, however, to note, that even in its present mild form it is of comfort to the Belgians. A letter written from Brussels in May 1917 contains the remark ‘Shall I tell you that the rare appearance of an Allied Airman sufficed to gladden us for several days, such simple visits showing the population that the Belgians outside do not forget those at home. What would it be if periodically they came to give us precise, certain, authentic news’. That at least the Courrier has dome for those parts of Belgium it reaches.”

You might think that none of the leaflets were in existence anymore, since most of them ended up in the trash just like those pizza parlor coupons that get attached to your front door every week, whether you want them or not. But PsyWar Society members collect them, and the organization produces a quarterly magazine, Falling Leaves, for collectors and researchers. Here’s the link:

Here’s the link to an interesting article about German propaganda leaflets:

Prisoners of war were a popular subject for all types of propaganda. They had two messages:

Look how well we treat prisoners — wouldn’t it be a relief to surrender?

You might as well surrender — these guys all did!

These are Germans captured by the British. 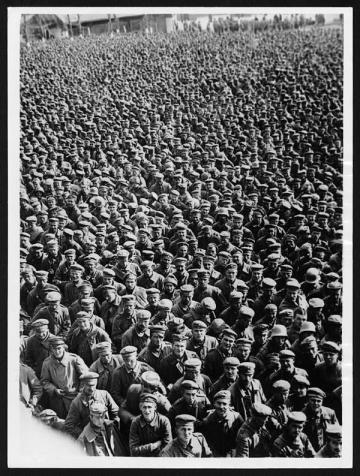 2 thoughts on “A little light reading”