Subtitled “Love Letter of a Rookie,” this is a comic collection of letters a fictional soldier in training camp writes home to his girl. Bill is a private, then at some point he’s a corporal, then I think he’s a private again. He’s in the infantry, then the artillery, then the infantry again.

Through it all, he is a combination of Gomer Pyle and Amelia Bedelia.

“Some one say that we was the highest payed army in the world. Besides all this money we get our bed and board. I guess they dont know that in the army bed and board mean the same thing.”

“The other day we was all lined up in the company street and the sargent says ‘Inspecshun arms.’ I lays down my gun an rolls up my sleeves.”

“Dere Mable” was written by Edward  Streeter and illustrated by G. William Breck, both of the 27th (New York) Division. Streeter is best known for writing “Father of the Bride.”

There were at least two sequels, “Thats Me All Over, Mable!” and “Same Old Bill, Eh, Mable.” It’s all very silly, but the endless toll of the dead and missing becomes overwhelming sometimes and this is the ultimate change of pace.

Sir Max Hastings is an award-winning British author and journalist.  He has written 23 books, and this is the book he’s working on now, to be completed in time for the centenary.

I love this cheery sentence:
“We moderns are extraordinarily unkind to each other in war – and in peace!”

Brigadier-General F.P. Crozier was not the kind of soldier who let ethical niceties get in the way of military success. Describing typical trench raids in his memoir A Brass Hat in No Man’s Land (1930), he writes:

As we require only one prisoner on each occasion, and as more are a nuisance, all other enemy soldiers encountered must be put to death.

All – it is implied – includes those offering to surrender.

What are our weapons? The pistol, the rifle, the bullet, the bayonet, knuckle-dusters, hook knives with which to rip up, daggers for the heart, butchers’ knives for the throat, the bomb for random work, once the prisoner has been extracted and bags of aminal thrown into the dugouts, served up with time fuses, to blow whole companies to smithereens. Tear gas bombs to cause temporary blindness, egg bombs charged with deadly poison to pulverise…

When I scrambled across Hill 60 (or maybe it was 62), the ground is so uneven, I kept thinking about how easy it would be to blow out your knee or twist an ankle. I suppose then you’d get shot.

Something that I don’t think military history has ever quite convinced in portraying is the extent to which people are vulnerable to accidents and illness war time. In particular during the periods of mass mobilisation during both world wars. The National Roll of the Great War gives unparalleled information about how people died, which sheds new light on the experiences that affected the people of Portsmouth.

During war time, the usual health and safety and economy measures go out of the window. On a Dreadnought, or on the front line, for that matter, there are all manner of things that can go wrong. Several men were washed overboard warships. There were accidental explosions. Men fell into dry docks, or even Canals. One man drowned whilst attempting to rescue a man who fell overboard. One man was seriously injured when he fell under his horse. All manner of dangers could…

Following up on a series of posts on the World War One Historical Association blog (https://ww1ha.wordpress.com/) regarding dust jacket art from the WWI era, I’ve decided to begin posting some of my favorite examples of war-era cover art.  This example is from a copy of the unit history for Company F of the 316th Infantry Regiment.  The cover and internal art was designed by a regimental veteran named Thomas M. Rivel who received the Distinguished Service Cross for his action outside Montfaucon, France in 1918.  His cover piece combines a few elements that are commonly seen in wartime cover art, including posies, trench details, aircraft and a stone-faced doughboy.  A great piece! It was almost over. The clock was ticking.

Well how are you?  I have been watching every mail for a letter from you.  I do wish you could drop me a few lines, so I shall be convinced that you are well and safe.  Goodness, New York just went crazy last Tuesday, when the papers announced “Germany Quits”.  Every factory and shop closed at 12 o’clock, peopled paraded for hours.  Then next day that papers contradicted it.  Isn’t it just wonderful if its really true, I am so anxious for it to end.  Aren’t you?  Joe dear, have you received my letters, and I sent you a picture of myself last week?  Only the picture makes me look so much older than twenty.  Nevertheless you will be able to see some likeness anyway.

How are you making out with French?  Can you speak any yet?  Don’t forget, I want…

Donkeys played many roles in World War I. They hauled equipment and ammunition. They carried the wounded — Australian Pvt. John Simpson became a hero to the troops at Gallipoli, carrying more than 300 wounded men back on a donkey he caught in a field. He was killed May 19, 1915.

But donkeys also provided companionship and entertainment. Sunday’s Daily Mail has a report on a medal awarded to Jimmy the donkey, who was born on the Somme battlefield and became a beloved mascot to the Cameronian Scottish rifles. Ths Daily Mail says, “Jimmy will be honoured as part of an exhibition at the Cameronian’s Museum in Hamilton, which will reopen on April 4.” 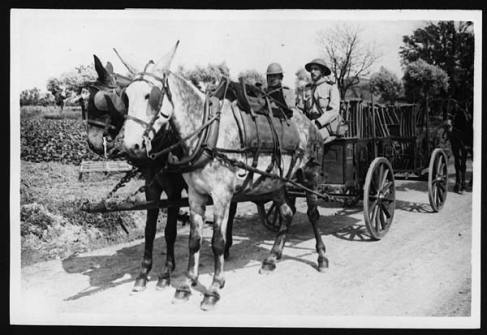 Donkeys pulling a load of shovels.
.

Jack Simpson Kirkpatrick and his donkey bring a wounded man to an aid station.

Donkey racing behind the lines. Don’t put your money on the fellow on the right!

The title of his blog comes from a Wilfred Owen poem.

Move him into the sun –
Gently its touch awoke him once,
At home, whispering of fields unsown.
Always it woke him, even in France,
Until this morning and this snow.
If anything might rouse him now
The kind old sun will know. 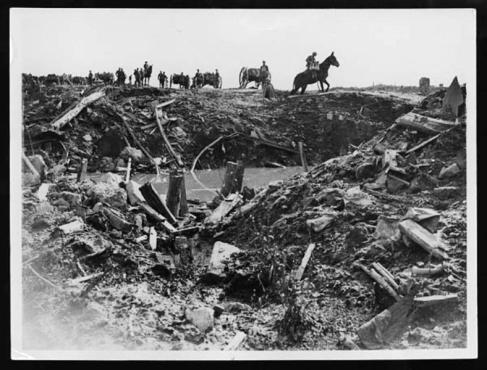 Horses on the Menin Road, headed for Gheluvelt.

Post-war, ex-soldiers become detectives — except for the racial stereotypes, which unfortunately were common in that era — this sounds like a fun (though rather silly) read.

An intriguing item in the Monash University online exhibit of detective fiction is number 63: The Big Heart, by John G. Brandon, described as the story of ‘a soldier, demobilized after the First World War, who finds work as a detective unravelling a blackmail plot.’
The book turns out to be one of the early-twenties thrillers that responded to the immense success of Sapper’s Bulldog Drummond by imitating it (Agatha Christie’s The Secret Adversary is another example.)
The similarities to Sapper’s bookare many: the plot is kicked off by a newspaper advertisement; the heroes are a group of ex-officers with a mighty appetite for beer; their womenfolk’s main function in the plot is to get kidnapped; the ex-soldiers apply skills learned in wartime to solve a peacetime problem; much play is made with the fact that one of them is excessively ugly (which doesn’t stop him from getting…

Take a look at Alan Hewer’s graph of the publication dates of the WWI books in his collection. Awesome!